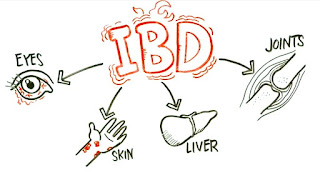 It looks like we may have another epidemic on our hands. This time it is Irritable Bowel Disease, or IBD.

Sometimes the symptoms of IBD are called Celiac Disease, Ulcerative Colitis or Crohn’s Disease. This is usually due to either a variation in symptoms, believed causes, or response to treatment. All three leave a person miserable with stomach pain, bloating and/or diarrhea. This makes the person afraid to eat anything, and their social lives become a thing of the past.

In addition to the pain and misery three quarters of those diagnosed as Crohn’s will have to undergo reconstructive bowel surgery due to the damage caused by the disease. Sometimes the damage is linked not to the disease, but to the treatment. These include intestinal blockages, a thickening of the intestinal wall, ulcers in the intestines, anus and rectum, nutritional malabsorption, anemia, osteoporosis, compromised liver function, and thyroid disease. There has even been a statistical link to leukemia, showing an increased risk factor of 700%.

One of the reasons junk food is looked at is that many of them contain emulsifiers. These are added to break down fats and allow them to blend with other ingredients. This gives the feel and taste of creaminess. These emulsifiers act as soap in the intestines, scrubbing out all the good bacteria that line our intestines to protect them from inflammation.  Once the walls are inflamed the bad bacteria have an easier time destroying the tissues.

Corticosteroids have also been linked to IBD, both in the numbers of people diagnosed and with the severity of the symptoms.  Elderly patients are more likely to be prescribed corticosteroids than younger people, and there is an increase in the elderly for developing these intestinal issues.  Patients with asthma and COPD, also rampant among the elderly also show an increased susceptibility to these problems.

The link to leukemia seems to be in the treatment. A group of drugs known as thiopurines seem to be at the center of this issue. These drugs provide symptom relief, and do not cure the problems.

If you have IBD type problems are you limited to modern medicine for relief, even though that relief can come at a dangerously high price? There is evidence that both dietary and alternatives helps are availbable.

Omega 3 fats are known to reduce inflammation, and they do this in the bowels as well. The exception is the form found in flax. Although it helps with overall inflammation there is little evidence that effect extends to the bowels.

Probiotic foods increase the good bacteria and decrease the bad bacteria in the gut. This seems to prevent a reoccurrence of the symptoms. Probiotic supplementation would also be appropriate.

Anti-inflammatory herbs seem to work better than over the counter pharmaceutical options. These include turmeric, boswelia and marshmallow root. This is not the same thing as commercial marshmallows.

Gluten and grains in general have also been linked to IBD type problems. Many times a removal of grain based foods bring remarkable symptom relief. That is why there is a growing industry of gluten free foods.  There has also been antidotal evidence that eating gluten free improves overall digestion, brain function, immune deficiencies and emotional health.

Hypnosis has been shown to be helpful in reducing bowel inflammation. There is evidence that it changes some of chemicals found in the bowel to a more normal balance.

Anyone who has had a gastrointestinal disease, used antibiotics, or traveled to countries with suboptimal sanitation is rejected.