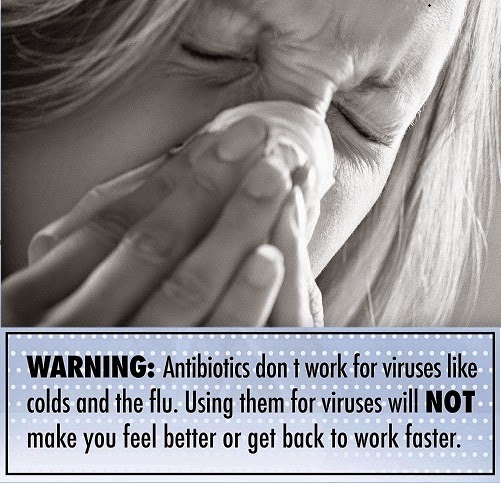 If you sneeze in a doctor’s office you are likely to be handed a prescription for an antibiotic. What is ironic is that colds, the common cause of sneezing is a virus and antibiotics don’t do a thing for viruses. Many times they will acknowledge this but say the antibiotic is to prevent ‘opportunistic bacterial infections’ that might attack while your immune system is busy fighting the virus. Sounds good in theory, but does it really work that way? Are antibiotics all they are cracked up to be?


As more and more people use antibiotics more of it ends up in our water supply. That means we are all taking small doses on a daily basis. Add that to the antibiotics given to our meat and dairy animals and we are getting some pretty good size doses. Is it any wonder that ‘superbugs’ are developing? These are bacteria that are resistant to antibiotics, and they are becoming a health care nightmare.

Once you recover from an illness does it seem like you catch every other illness that comes along? Some people claim that it takes a while for your immune system to build back up. That may be, but the antibiotic you took remains in your system and depresses your immune system even further. You then become your doctor’s cash cow patient. Studies show you are even more prone to fungal and candida overgrowths.

You become more susceptible to many viruses, including Chronic Fatigue Syndrome, and eve AIDS.
The people that take the most antibiotics are the ones with the highest rate of cancer. One study showed that as little as six prescriptions had a 1.5 percent greater risk of cancer.

Antibiotic use is linked to an increase in mercury in the body. It is thought to be because antibiotics interfere with the body’s elimination of mercury. Increased mercury is linked to autism, Alzheimer’s disease, ALS, multiple sclerosis, Parkinson’s disease, neurodevelopmental diseases, nephrotoxicity, and cancer.

Antibiotic use has been linked with an increase in obesity among children. Many scientists believe this is because they alter the gut flora, changing the way these children metabolize food. This may also contribute to the increase in childhood allergies and asthma. There is even a link to autism.

There is a relatively new group of antibiotics that are even more harmful than the older ones. They are called Fluoroquinolones because they contain fluoride. The fluoride helps the antibiotic get deeper into the cells, but fluoride is a neurotoxin. It kills brain cells. Unfortunately they are the most widely prescribed antibiotics. The side effects of these drugs are not for the faint of heart and do not always go away when you stop taking them. They can cause permanent damage to the human body. They are found under the names


We don’t need antibiotics most of the time. There are a lot of natural substances that kill bacteria. Many of them kill viruses, fungus and parasites as well. Some of the better known are Colloidal Silver, Tea Tree Oil, Oregano Essential Oil and intravenous Vitamin C.

Our biggest threat comes from the agricultural industry that uses antibiotics indiscriminately and is filling our food supply with these chemicals. The only way to avoid them is to purchase meat from animals that have been raised without them.